Baby Shower Cupcakes That Will Amaze Your Guests 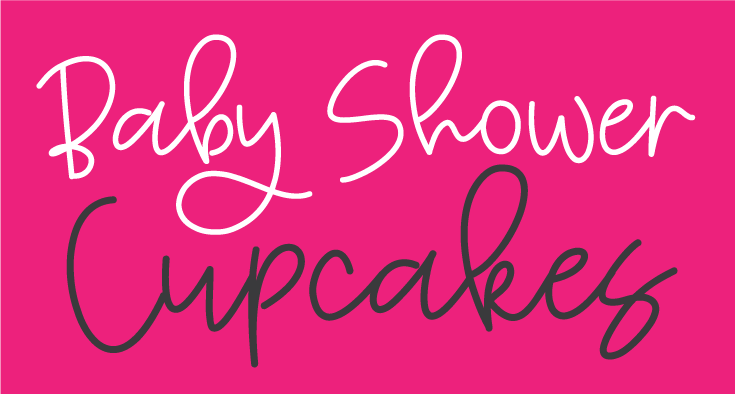 Serving baby shower cupcakes is a wonderful alternative to the traditional baby shower cake. They are easier to serve and guests love them!

Below are several inspiring shower cupcake images to get you started! 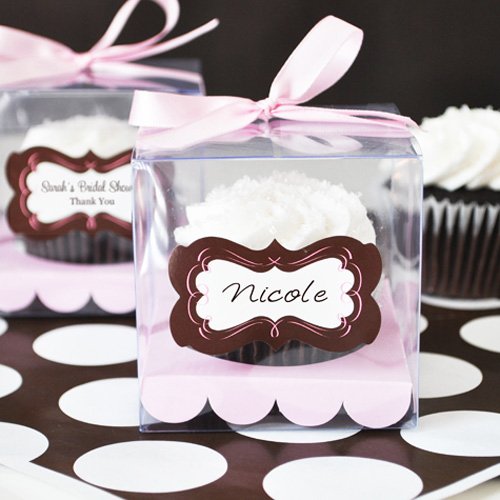 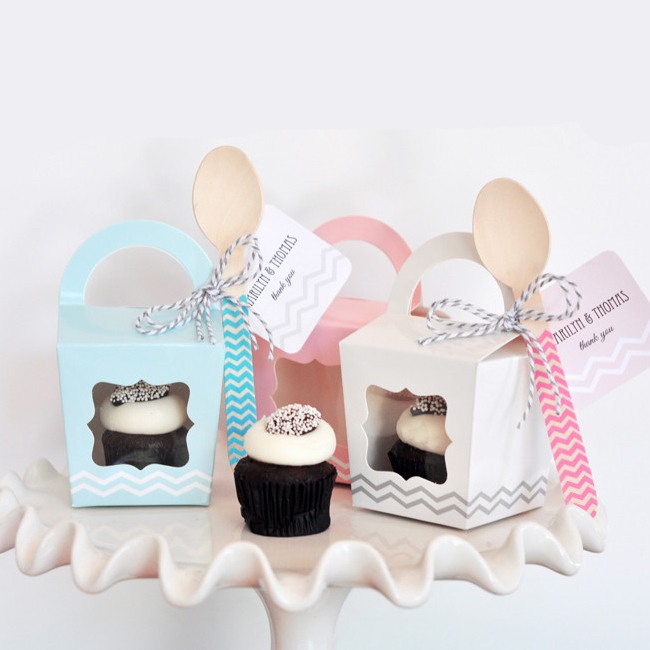 Another option, and what many baby shower hostesses are now doing, is serving a cute baby shower cake at the shower, then sending guests home with adorable baby shower cupcakes in cute little favor boxes!

Who wouldn't want to get a delicious cupcake for a baby shower favor? 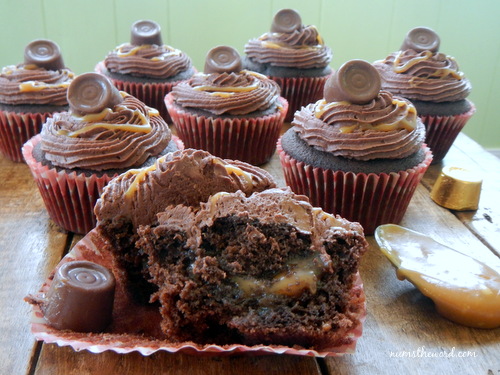 A clever way to jazz up your cupcakes is by stuffing them with yummy candies.

You can add mini Reese's peanut butter cups, Rolos, Hershey's Kisses, mint patties, toffee pieces, etc - to the inside of cupcakes just before baking - just gently push the candy down into the batter after pouring them into the pans.

The picture above features Rolo Chocolate Cupcakes For A Baby Shower - so yummy! 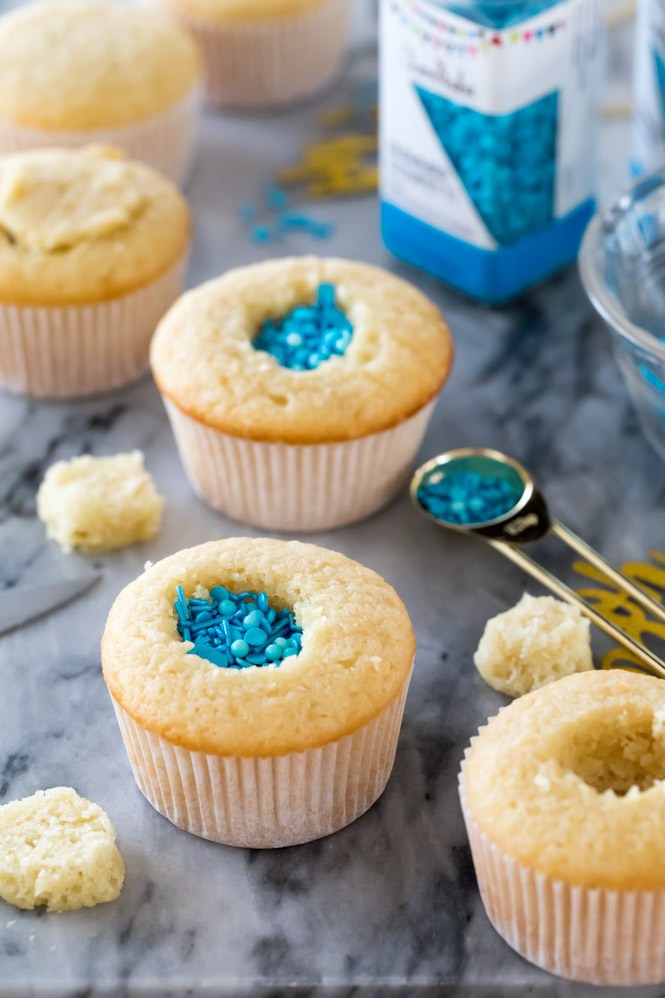 image source for the above photos

If you are throwing a gender reveal baby shower and looking for a creative way to reveal the gender, bake up some "Gender Reveal Confetti Cupcakes" 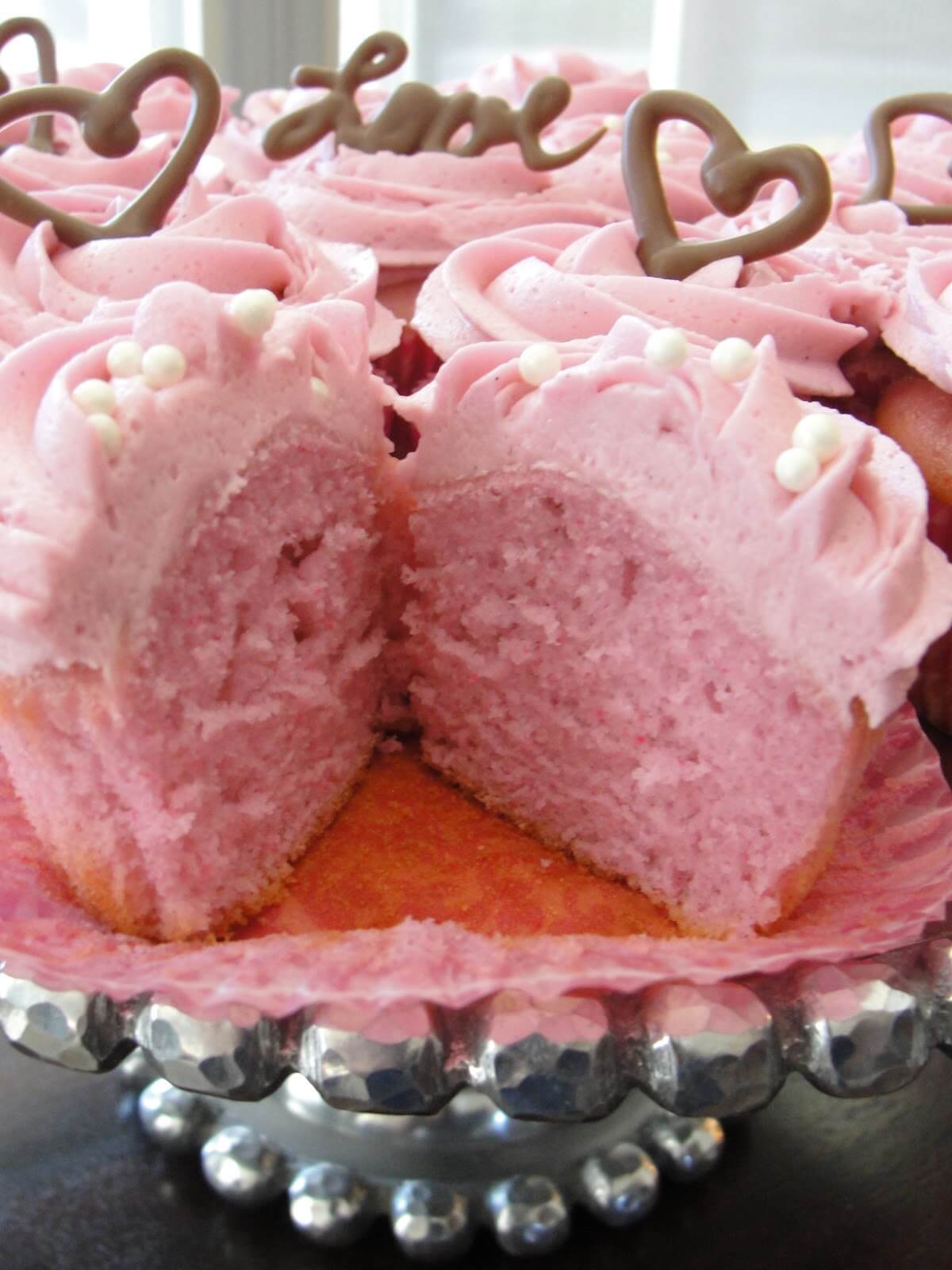 The internet has been buzzing about these yummy pink champagne cupcakes so I just had to share them with you!

The recipe is simple - so simple that anyone can make them.

Mix all of the above ingredients together. Bake according to the box directions.

Make the cute chocolate "baby shower cupcake toppers" by microwaving 'melting chocolate', pouring it into a squeeze bottle with a tip on it, piping words onto waxed paper (such as girl, love, hearts, stars, etc) let dry and carefully peel off each chocolate cupcake topper. Add to frosted cupcakes and you're done!

Another option, if you don't feel like baking your own cupcakes, is to Google "Baby Shower Cupcakes Near Me' to find local cupcake bakers.

These are so simple to make and add a pop of excitement to baby shower cupcakes!

Click on pic for full details on how to make these cuties ~ and a FREE template. 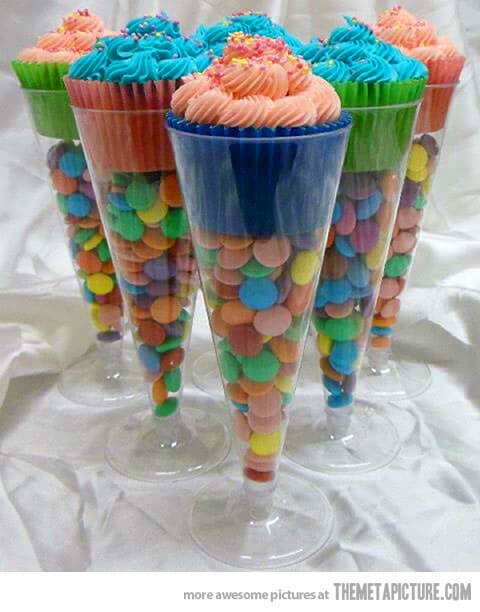 Baby shower cupcakes in champagne flutes - so genius and adorable!

Fill some dollar store flutes with yummy candy or chocolates, add a colorful baby shower cupcake, and bam! -  You have some adorable treats!

Less mess makes it easier to serve at a baby shower party! And... your guests will rave about them! 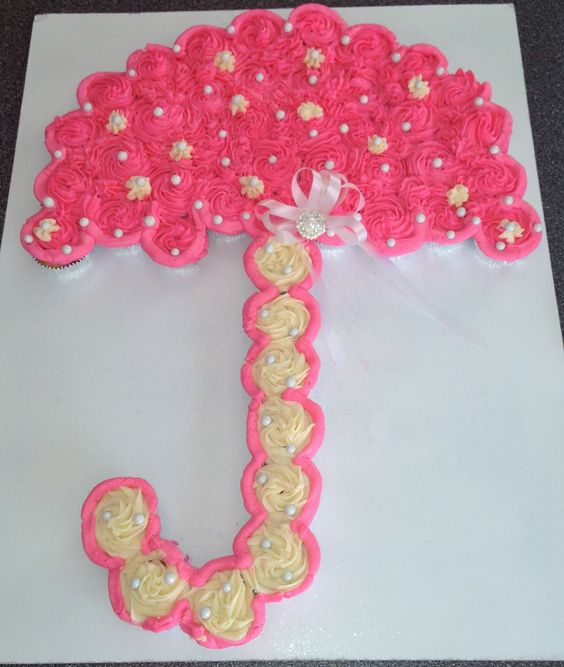 These pink umbrella, pull-apart cupcakes are so easy to make and they are absolutely adorable!

Trust me, they will be a topic of conversation at the shower. 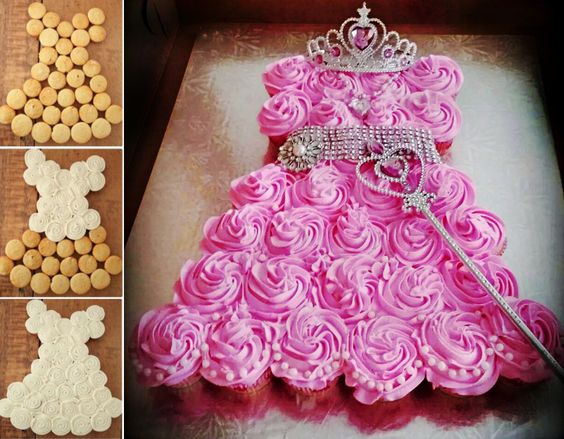 Easily assemble some yummy pink cupcakes to look like an elegant princess dress.

Guests love pull apart baby shower cakes because of their cuteness - and hostesses love them because they are easy to serve and clean up!

Elephant cupcakes are a popular item and gets tons of searches each month - so I thought I would feature some cute ones here. 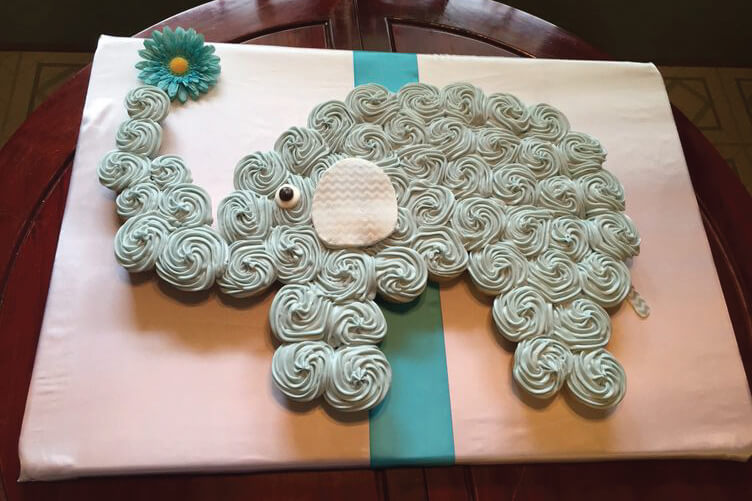 Transform regular cupcakes into a creative, elephant baby shower cake by frosting each one and arranging them into the shape of an elephant.

Cupcake cakes are so fun and easy because guests can just grab the cupcake they want - no cutting involved! 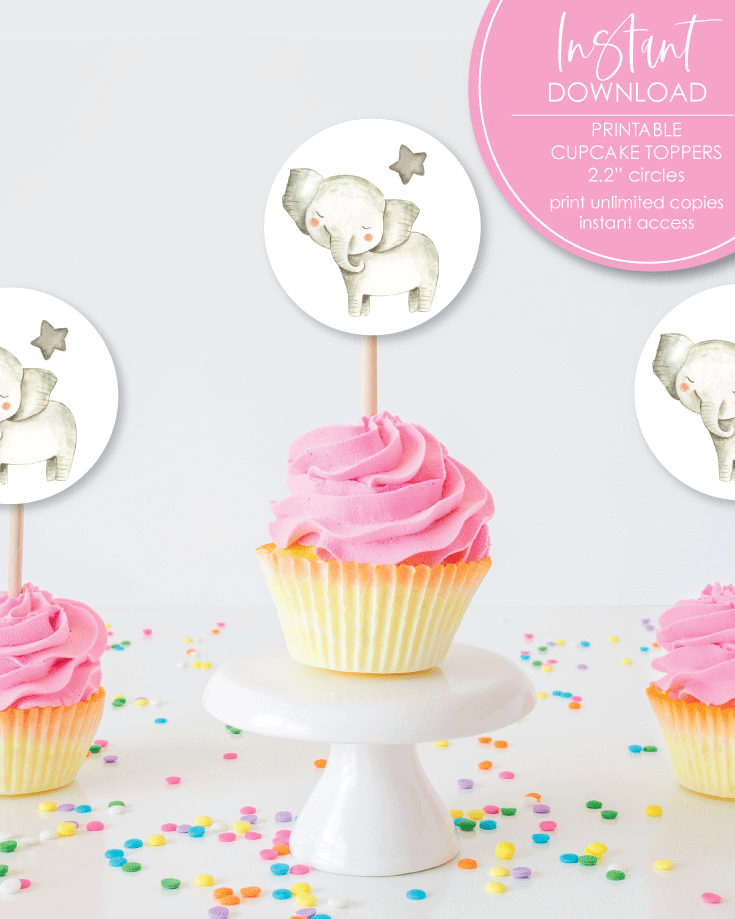 grab these printable elephant cupcake toppers in our shop

An easy way to jazz up plain cupcakes is to add a cupcake topper to them! We designed some elephant baby shower cupcake toppers that you can print, cut and add to your cupcakes for instant cuteness! 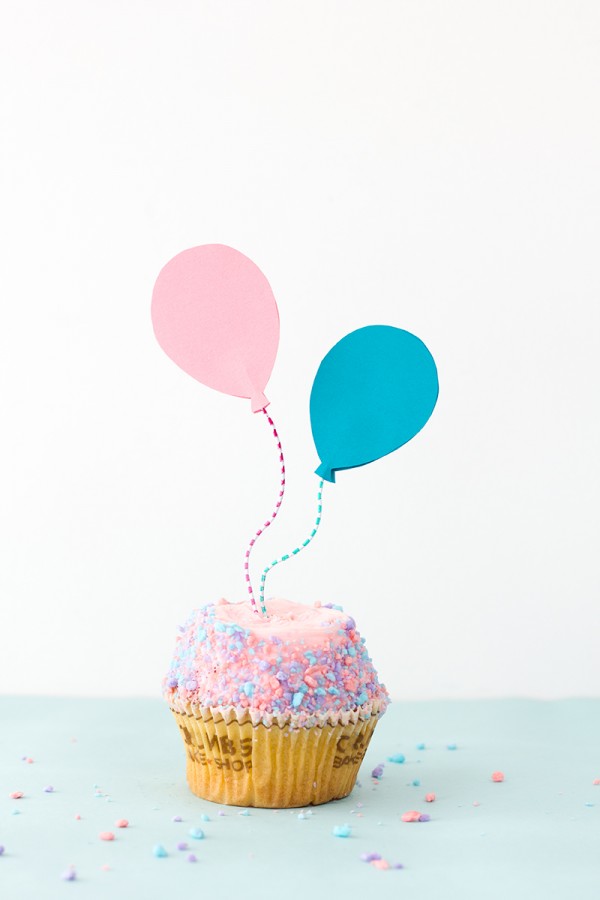 click on picture for more information on how to create these delicate cupcakes! 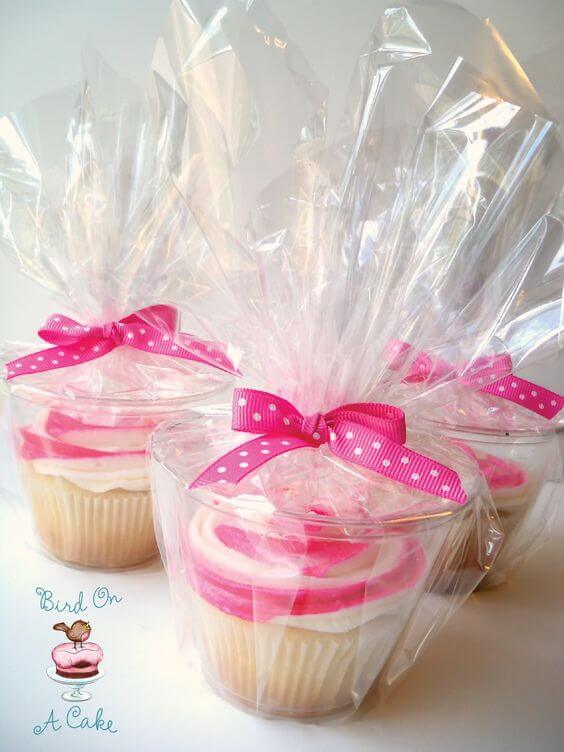 If you are looking for the perfect baby shower favor ideas - that don't cost a ton of money and are easy to make, then these are for you!

In addition to serving a baby shower cake, whip up some yummy cupcakes, pop each one into plastic cups, rap in cellophane and tie with a bow! Can also make blue baby shower cupcakes for a boy.

Send home one with each guest for the sweetest baby shower favor idea! 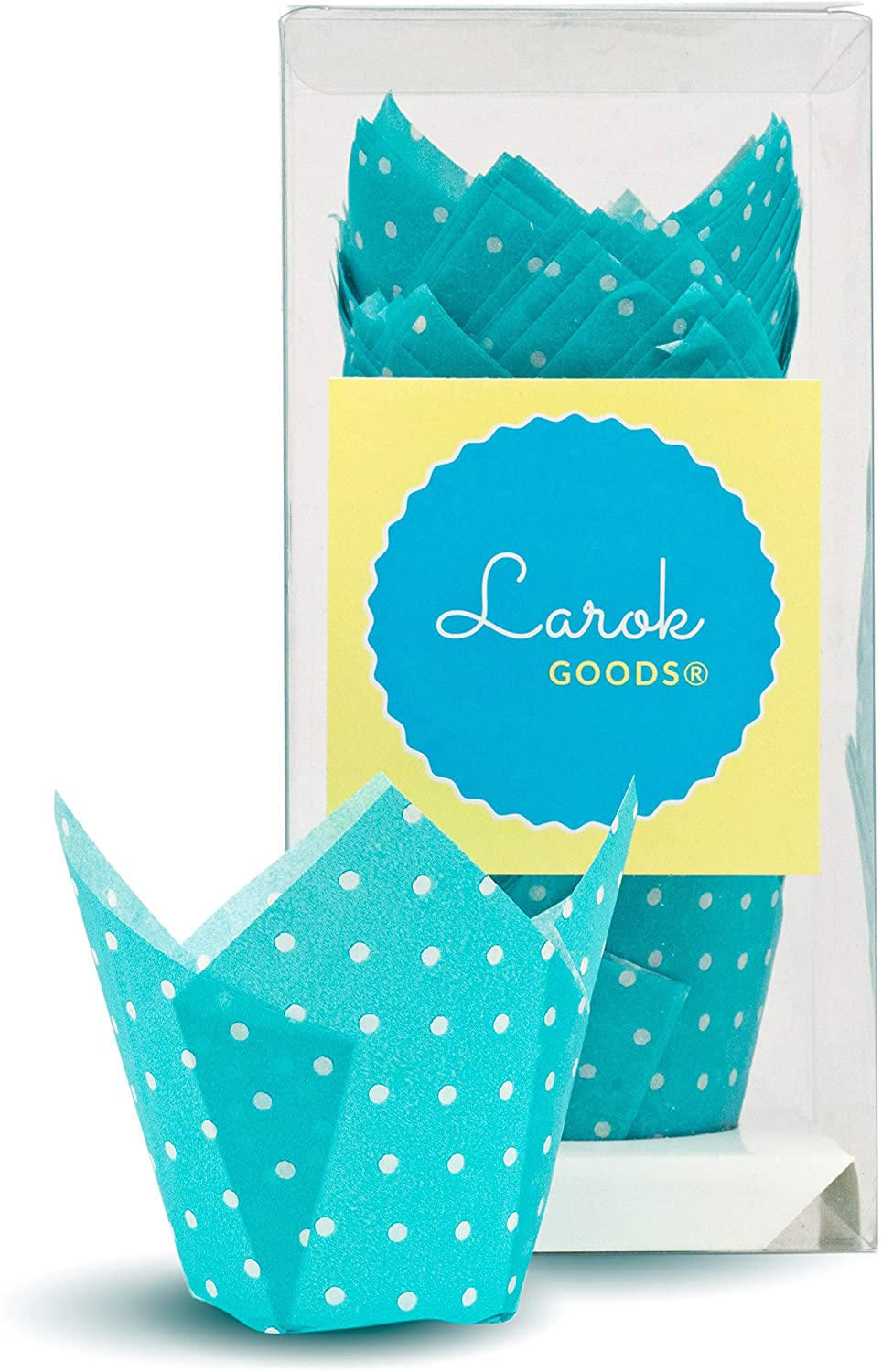 BABY SHOWER CUPCAKE LINERS - see where to get these cuties

These sweet Bear Pin Cupcakes are so perfectly frosted they look like mini baby shower cakes. Almost too cute to eat!

I started with vanilla cupcakes (regular size) baked with no liner. I used a serrated knife to cut off a little of the dome on top.

Then, I placed the cupcake upside down on my turntable or counter, to ice it in vanilla butter cream.

It's a little tricky to frost cakes so small, but with practice it gets better.

I've also done them frozen, which sometimes helps. Also I put a dab of icing on the bottom of the cupcake so it adheres to the surface to allow for frosting.

After getting the base coat on, I use my small spatula to transfer the cake to a flattened cupcake paper or small doily.

Then, I use a yellow pastel icing to make top and bottom shell borders (with a small shell tip, such as #16).

To make the bear diaper pin on top, I start with making the pin shape with gray butter cream.

Then, for the bears head, I use my round tip (like #5) to make a round, flat ball, and two little round ears.

The snout is another little ball on top of the face. Then I use black to make two little eyes, and for the little triangle nose and little line down the snout.

Baby shower cupcakes are becoming one of the trendiest additions to see at a baby shower and these small treats can be decorated in a huge number of different ways.

The cupcake trend is now seen all over the world, and people are choosing this style of sweet treat over conventional cakes.

The concept for cupcakes has been around for centuries; however, they became popular when the first cupcake store opened in 1996.

Cupcakes can have a theme and be decorated in a huge array of different styles ensuring that they are suitable for every occasion.

Baking baby shower cupcakes is extremely straightforward to do, and even with remarkably little cake making skills you will be able to create an excellent display.

Cupcakes are ideal for any event and can be displayed in a huge number of different ways.

If you have a cupcake tower, this will enhance the look of the cupcakes and make them easier to reach.

Although the towers look impressive they are not necessary, and you will be able to create a great display for your baby shower cupcakes with or without the tower.

Cupcakes are very versatile, and will ensure that everyone has the opportunity to have some cake.

The flavors, frosting, colors and styles can all be mixed to ensure that every single guest will find something they enjoy.

There are no rules when it comes to decorating the baby shower cupcakes, and you can be as imaginative as you want.

If you know the sex of the baby, you may want to frost the cupcakes in either pink or blue. If the sex is unknown, you could decorate in both colors, or choose something entirely neutral.

The only thing, which is restricting your choices, is your imagination, and you can create some stunning masterpieces if you get creative.

Depending on how adventurous you are will often determine what designs you make for the baby shower cupcakes.

However, there are many different ideas that are very simple to create, and will look stunning at the baby shower.

You could make miniature building blocks for the top of the cupcakes, or little teddy bears, pacifiers or bottles.

If the baby shower is to be a theme other than babies, you could decorate the cupcakes to include this.

The cupcakes can have a message written on them, such as "it's a girl" or "congratulations" You could make baby faces from fondant and place them on the top of the cupcake.

The possibilities are endless and will ensure that everyone at the baby shower enjoys the cupcakes.

Cupcakes are so convenient to serve as there is no need to worry about portion control, or if everyone can get some cake.

Once you know how many people are expected you simply need to make enough cupcakes with a few to spare.

Cupcakes are a very affordable way to create the perfect decoration for the baby shower, baking the cupcakes is no more expensive than baking an average cake.

However, cupcakes will offer you so many more options and decorating opportunities.

Once you begin to decorate you will see how much fun it is and want to make cupcakes for every event.

Add your ideas or comments
FacebookTwitterPinterest

Some of the items that I recommend are affiliate links. When you click links and purchase items, in some cases, I will receive a referral commission. Amazon Associates Disclosure: Cutest-Baby-Shower-Ideas.com is a participant in the Amazon Services LLC Associates Program, an affiliate advertising program designed to provide a means for sites to earn advertising fees by advertising and linking to amazon.com.